PROOF! The internet is not all real!

The late football coach Dennis Green famously sputtered after his Arizona Cardinals lost a big lead to the Chicago Bears in 2006: “They are who we thought they were!!!”.

DOES NOT APPLY TO THE INTERNET

No longer just the province of faceless hackers and fake identities, the internet now is the land of fake faces, too.  Very often people are not who you thought they were.

I first became suspicious when my LiveChat support agent ‘James’ was a little awkward (every conversation started with “hey”), and he seemed to operate from a very different time zone.  He just didn’t seem like the chill dude in his photo.

Suspecting that his image was stolen from a real person, I did what anyone with borderline clinical stalking tendencies would do – I did a reverse Google search on his photo.

Eureka! ‘James’ was actually a real person named Tom Brown, a Director at a company called Facilis in the Bay area.  Hey – I’ll let Tom know someone stole his photo.  Upon looking for his contact info, I found out that this was fake, too.  There’s a Facilis, but this isn’t it.  The site URL http://www.pgyx.com/team-member.html# looks like a developmental website for a business that may or may not exist, now or in the future.  You can check for yourself.

Back to the image search.  It turns out this person, whoever he is, has been replicated and is now overrunning the internet.  Sort of like the magic brooms in Fantasia.  ‘James/Tom’ is also Michael Flynn, lead developer at a tech company; Bob Roger, CEO of a restaurant supply company; Mike Hussy, data guy at Delhi Public Schools, and many more.

This dude is everywhere!  It is likely that many or all of these people are placeholders on developmental sites created by a web developer somewhere.  At this point I stopped the investigation…almost.

Because the fake sites usually had more than one photo, I did the same search on a female face in one of these sites, and found that there’s lots of her, too!  And lots of other people as well.  It’s like there’s a parallel iStockphoto universe of smiling people. 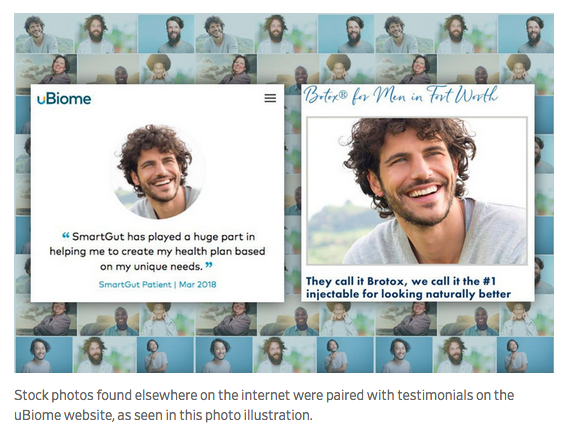 Well, according to a May 16, 2019 article in the Wall Street Journal, there is.  A company called uBiome recently had to take down a photo accompanying a testimonial, because they used one of these stock models as well.

In a final act of avoiding doing something useful, I did a reverse image search on the uBiome guy as well.  HE’S ONE OF THEM!

It was at this point I needed to remind myself that these faces actually belong to real people – they’re not just virtual props for developers.  But good luck finding the real one.

There has been an increase in the use of images of real people, to humanize online transactions.  Just be warned that the person you think you’re interacting with may not be the person you see.

Cowboy philosopher Will Rogers once said:  “Don’t believe anything you hear, and only half of what you see”.

I think it’s time to take that down to a quarter of what you see.

Posted in Branding, Marketing and Media, Technology and tagged avatars, Dennis Green, istockphoto, LiveChat, stock photos, They are who we thought they were, uBiome, wall street journal, WSJ. Bookmark the permalink.

Why Online Reviews Haven’t Totally Replaced Word of Mouth (yet)

Fast forward a few millennia – – millions of shopping decisions are routinely made based on star ratings or online reviews – from total strangers.

In other words, online reviews are often less credible sources than Caveman Gok had. 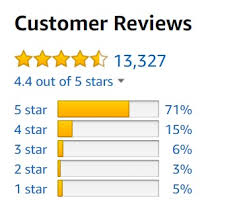 While technology has provided lots of review resources (e.g. Yelp, Glassdoor, Amazon Stars), it has not yet figured out how to protect the integrity of these reviews – – thus making them not totally dependable.

And consumers are increasingly realizing this.

At the end of the day, a personal reco from someone you know may still be your best bet.

Consider these news stories from just the last few weeks:

“I visited a Facebook group called “Amazon Reviews” and was promised a full refund on a $44 Amazon purchase of a pet fountain if I did the following on the mega-retailer’s site:
1. Write a positive review. 2. Post my photos of the product. 3. Rate it five stars.
Not only is this ethically problematic, it is also against Amazon and Facebook user policies.”

There are 4 types of reviews mentioned in the article:
1. Legit reviews – you bought it, you review it, good or bad.
2. Vine reviews – incentivized reviews for prolific reviewers. Objectivity not guaranteed.
3. Incentivized reviews (like the pet fountain above). Objectivity clearly suspect.
4. Fake reviews – often from Asian click farms. Totally bogus – often products reviewed are not even remotely what is listed.
Not exactly encouraging.

To allegedly combat the bias for negative reviews on sites like Glassdoor, some companies are apparently gently encouraging (and in some cases providing incentives) for employees to leave positive reviews.

“Last summer, employees of Guaranteed Rate Inc. posted a stream of negative reviews about the mortgage broker on Glassdoor, a company-ratings website.
– “An American sweatshop,” read a one-star review in June. “Worst company I ever worked for,” read another in July. The company’s rating on Glassdoor, which is determined by employee feedback, fell to 2.6 stars out of 5.
– Concerned that negative reviews could hurt recruiting, Guaranteed Rate CEO Victor Ciardelli instructed his team to enlist employees likely to post positive reviews, said a person familiar with his instructions. In September and October these employees flooded Glassdoor with hundreds of five-star ratings. The company rating now sits at 4.1.”

One study estimates that while 88% of consumers put their trust in online reviews, at least 20% of them are in reality fake (the reviews, not the consumers).

As time goes on, consumers will judge online reviews with an increasing dose of skepticism, until AI figures out a way to effectively and convincingly screen out reviews that are just not legit.  It’s complicated (see example from the Boston Globe).

So what can a marketer do to encourage the most credible endorsements of their products —  enthusiastic, personal word of mouth recommendations?

Here are 3 examples, 2 of which involve reaching out and delighting the customer such that they take some sort of action that could influence others:

Random acts of kindness may be seen as an incremental cost, but the personal connection can not only encourage current customers to be loyal, it can encourage them to tell others about their great experience.  And that’s the name of the game.

The Pain of Not Having Hand

Don’t you hate it when you want your money back and have no leverage?  Explanation of this (and ‘Hand’) follows.

This is about companies who put barriers in place to enable them to hold onto your money until they wear you out.  A war of attrition.  Things like unreachable customer service, phone personnel with no names who cannot be recontacted, endless phone wait times, etc.   We’ve all been there.  Some of you are probably on hold with someone right now!

My goal is always to have a ‘So What’ in my posts but other than stopping transacting altogether, I am not sure how to preemptively protect against this!  So I’m open to suggestions.

So that’s your challenge, dear readers.  For the good of humanity, help us find a solution.

The basic model has been around:  exploit human nature.

It used to go something like this: you get a gift card and the issuer gets the revenue and records future redemption as a liability. You put it in the kitchen ‘everything’ drawer next to your frequent shopper cards from 1995, never redeem it, company books revenue with no expense. Nice! Called ‘breakage’ in accounting, commonly known as ‘slippage’ in consumer goods.  Coupons are issued, people don’t bother redeeming, etc.

This new version is more insidious and aggravating. As George Costanza might say, we have no hand!  And they know it!

Here’s how it works (examples below):

Case study 1: Booked AirBNB for about $1600 for a week; they (and owner) got payment in advance. Upon arrival, property has significant water leaks, which are being repaired, rendering it uninhabitable. AirBNB is contacted, situation explained, they offer $400 refund afterward and refuse to discuss the matter further.  Boo, AirBNB!

Case study 2: Rented car with GPS. GPS didn’t work. Took over an hour and several emails just to get back the $30.  Boo, Fox Car Rental!

Case study 3: Moved across the country. $17k total bill, which required payment in full ahead of time (apparently this is standard operating procedure, which is itself worthy of a separate conversation). Move happened 3 days late, which created additional expense for friends who flew in to help with the move, and which technically qualified as a ‘late delivery’ by the mover.  Several items broken. After huge effort and many hours and emails, result was a check for $20 we got in the mail. Zero hand in this one.  Double Boo, North American Van Lines!

Case study 4: WSJ inexplicably stops being delivered one Friday. Go to handy online notification area but service is down. Chat is not manned yet (it’s before 8). Phone line also not available. Paper doesn’t come on Saturday either, make several online entreaties to both email and chat. Now start getting 2 (identical) papers on Monday. Issue finally settled on Tuesday.  Boo, WSJ!

In all of the cited cases the supplier messed up, but the burden was on the consumer to spend the significant effort to (maybe) get a satisfactory reimbursement.  There is no Online People’s Court to help resolve these issues.   I personally resent having to spend precious time just to claim what is mine in the first place!

Sure, over the long haul corporate reputations can be harmed, penalizing bad behavior.  But I don’t want to wait for the long haul.

How can we fix this?

What an Epic Fail Integrated Marketing Campaign Looks Like

Monday’s Wall Street Journal delivered a rather amazing example of how NOT to promote a product, along with the news and pithy commentary.

Most marketers know that messaging can be maximized if deployed consistently across vehicles.  This is apparently more difficult than it seems.

A cursory scan of the ad shows a few obvious errors:

This brings up a few key questions:

This is a campaign that seems to have been thrown together with not much thought other than a price point and a photo.

These people really need to get their shirt together.

One thing this ad is excellent at is demonstrating, by omission, some obvious basics of an integrated campaign:

The Armchair MBA works hard to scour the globe for stories worthy of your attention. This one fell into our lap.

As the saying goes, better lucky than good.