Don’t let the unsexy ‘Institute of Food Technologists’ name throw you; IFT’s members are basically the source of the Nile for foods and beverages.  IFT’s national Expo was just held in Chicago, where I walked the many miles of the McCormick Place floor so you didn’t have to.  It was where you could see ingredient innovations that will show up without warning in tomorrow’s new foods and beverages. 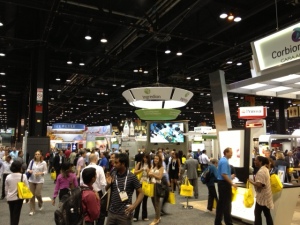 So for your edification, I hereby present my Top 10 Observations.

1) Chia.  No, not Chia Pets (although it’s the same plant) or even Chia LaBoeuf. An ancient grain, chia seeds promise high levels of Omega-3, ALA, fiber, calcium and minerals.  One marketer, Salba, targets their ‘super chia seeds’ at ‘smarty-pants’ consumers.  And you will need to think about it a little: like wheat germ, chia seeds aren’t generally eaten alone; they are typically sprinkled on or mixed in with other foods. 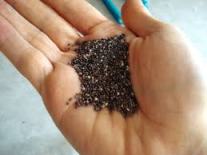 2) Matcha. This finely ground, premium green tea powder has been used ceremonially for millennia in Japan, and is offered in top restaurants worldwide.  For culinary purposes, matcha’s high amino acid content delivers a umami taste profile that can enable lower salt content.  Matcha can also be used as a colorant, due to its distinct green hue. The matcha makers were pushing all manner of green foods made with matcha, not all of which were ready for prime time.  High in antioxidants, you will likely have your first matcha moment at some point soon.  Arigatou gozaimasu.

3) Saskatoon Berries.  So I’m at the Canada pavilion (they’re so nice there) and there’s a display showing Saskatoon berries (aka Prairie Berries) positioned as the next super fruit, with higher antioxidants than all your previous favorites (acaí, goji, etc.).  I try them — and they’re good!  Blueberry-sized but more fleshy, with just a hint of tartness.  Already well-liked for the obligatory preserves, pies and such, you may well be seeing Saskatoon berries showing up in more foods and beverages.  Trivia:  the province Saskatoon was named for the berry, not the other way around.  Who knew, indeed.

4) The word ‘pulse’. OK, I don’t live in Legume World, so maybe you’re familiar with the word; it’s always been just beans, peas and lentils to me.  But a lot more grain processors have started using the word pulse; my guess is you’ll be hearing it a lot more in the future.  Probably because it sounds a lot more sophisticated than talking about lima beans. (‘I’m in the pulse business, yeah baby!’) 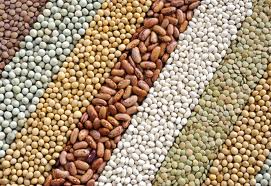 5) Bamboo Fiber.  This ingredient has long been used for textiles; I just hadn’t seen it in food.  Providing fiber’s benefits of texture, as well as bulking properties that accelerate one’s, ahem, transit time, it is used in juices, baked goods, pasta, sauces, among other applications, and is non-caloric.  And it’s label-friendly, too, being able to be called ‘vegetable fiber’.  I just don’t know the cost for all these benefits – – maybe we’ll sort that out next time around.

you know what this is

6) Natural food dyes.  Not surprisingly, the EU clean label trend has finally waded ashore from the Atlantic and is starting to make greater inroads in US food formulation.  Consumers increasingly want to see natural colors on the label (and of course, we know that everyone who claims to read labels always does).  So instead of CSPI whipping boys Yellow 5 or Red 40, get ready for more paprika, lycopene, annatto, turmeric and of course, cochineal extract.  But if you find out that the color comes from crushed insects, or algae, or your Velveeta doesn’t have its characteristic hi-glo orange-yellow hue anymore, don’t come crying to me. 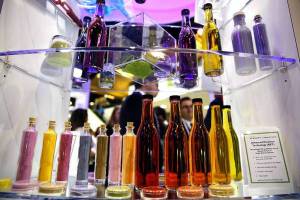 7) Safety testing.  Ever since Roman praegustators, there has been a need for food testing.  And as the stakes have risen recently (see: melamine), based on my observation, so has the number of companies offering testing services to meet SQF and BRC standards (some great tech-speak that can score you some major points in the IFT cocktail hour – – but perhaps not in too many other places).
Tests for pathogens, listeria, salmonella, E. Coli, as well as fraudulent ingredients, can be done using HPLC, genetic molecular testing, straightforward micro testing, mass spectrometry, colony counting and zone sizing, and numerous other approaches that I don’t understand, using chemicals, software, and machinery.  As a consumer, it’s good to know that there is such a focus on safety.  As an IFT show-goer, it was disappointing – the food safety guys don’t tend to give out free food or tchotchkes. 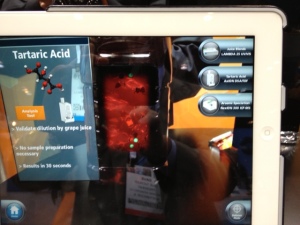 This software helps detect ingredients that shouldn’t be there, in this case tartaric acid. It can also see if that gluten-free claim is really true, or if there actually was any Benzedrine in Mrs. Murphy’s Ovaltine.

8) Sodium reduction.  The holy trinity of ingredients to avoid are fat, calories and sodium.  The consequences of over-consuming the first two are visible.  Sodium reduction helps with non-visible dangers like hypertension (dangers that Americans typically are excellent at ignoring), and as a result there has been less urgency.  But it seems that this is changing.  There were quite a few sodium reduction products offered promising great taste, using approaches as disparate as different crystal shape, blended granules, microspheres, starch and baking solutions, and more.  You heard it here first, the age of real sodium reduction has arrived. 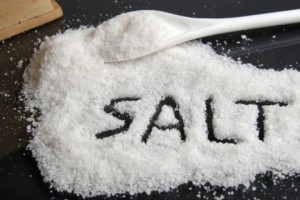 9 in 10 Americans over age 2 eat too much sodium

9) Alternatives to traditional ingredients.  What do you do for news when the main building blocks of food (like wheat flour) are not only mature, but facing new challenges (like GMO-free, gluten-free, etc.)?  You introduce new ways to get there.  Hence flours from sweet potatoes, soy, sesame, flax, coconut, rice, spelt, almond, buckwheat, spirulina and more.  Each has its own taste profile, nutritional benefits, and processing limitations.  You won’t see this stuff in your Twinkies, but it’s coming elsewhere, and it will be great to have more taste, texture and nutritional options. 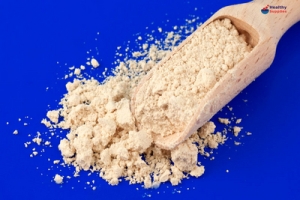 10) Maple Water.  Still trying to wrap your head around coconut water?  Well, clear out some mindspace for maple water.  It’s so new, it wasn’t even in the show – – I heard about it from a friendly Canadian.  It seems the Quebec maple producers have launched this product as a thirst quencher, ingredient, and in any case, an all-around transparent strategy to extend revenues from the maple crop.  It is supposed to have a distinctive flavor, slightly sweet.  Coconut water from the south, now maple water from the north, it seems the US has its flavored water NAFTA obligations covered. 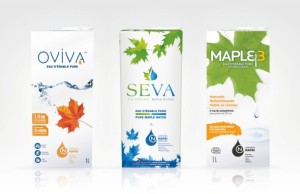 (actually, it’s not yet clear exactly what they want us to do with this stuff)

Bonus points for using this ingredient in YOUR product. 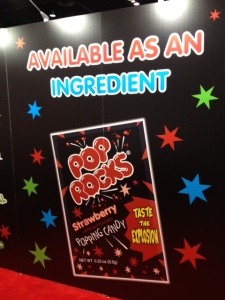 That’s it – see you at next year’s show!