After over a year, the food industry has finally begun to voice frustration with the upcoming Corporate Average Calorie Count (CACC) requirements that were a little-noticed insertion in the recently implemented Affordable Care Act.

Like it or not, this law has been on the books for over a year – – why the sudden passive-aggressive reaction?

Like Big Auto’s Corporate Average Fuel Economy (CAFE) standards, CACC requires all US-based food and beverage manufacturers making over 20 products to average at or below 100 calories-per-serving for all processed products by 2019.   While CAFE uses a sales-weighted mean, CACC counts all products equally.  “We decided to use a simpler approach that everyone – consumers, manufacturers, retailers – – and Congress – – could understand”, said HHS Secretary Kathleen Sebelius (who knows a thing or two about the importance of simplicity). 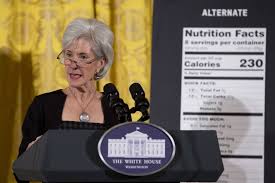 Companies need to submit CACC plans by the end of 2014, with final compliance targeted by 2019.  Excluded are imported products, unprocessed foods, dairy, ‘ingredient’ foods like peanut butter or oil, alcoholic beverages and products sold through foodservice, vending and convenience channels (although vending machines are impacted by the same provision in ACA and have to post calorie counts by the end of 2014) .  Companies not meeting standards will face penalties of $1,000 per calorie above the target level, multiplied by each $1 million of revenue of that company. 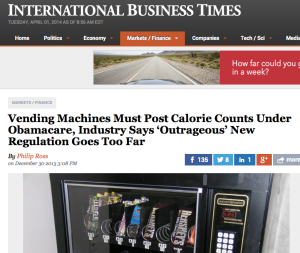 Food manufacturers are just now starting to realize the size of the challenge.  “CACC creates significant costs for manufacturers, a huge compliance burden, and most importantly, is likely to remove choice and impact taste for consumers,” said Lloyd Braun, CEO of Peterman Bakeries of Omaha, NE.  “If it’s difficult for a smaller producer like us, it could be almost impossible for the Krafts and Pepsis of the world”.

Indeed, meeting the standard will be tough.  We took a look at PepsiCo to see what they are facing.

According to its websites, PepsiCo sells 1327 products across its Pepsi, Frito-Lay and Quaker businesses (not counting Tropicana).  Its Corporate Average Calorie Count now stands at 118.2, with beverages actually close to the standard at 102.6, brought up by Frito-Lay at 137.9 and Quaker at 150.7 (click on chart).

To meet the 100 calorie corporate goal, PepsiCo will likely need a combination of reformulation, elimination of higher-calorie offerings, and addition of lower-calorie offerings.  This could mean fewer products like Grandma’s Cookies (210 calories), Quaker Breakfast Cookies (175) and Starbucks Frappuccino (290) and more like Rice Cakes (35), Matador Jerky (75) and lots more AMP Sugar-free Energy Drinks (15).  Happily, Quaker’s Quisp cereal checks in at an even 100 calories and thus seems safe.

As difficult as this current Pepsi Challenge is, they at least have the benefit of a large number of products (and frankly, a couple of large subsidiaries) to work with.  The CACC mandate could be terminal for those companies specializing in more indulgent fare, such as frozen pizza (285), fettucine alfredo (415) and Garrett’s Gingerbread CaramelCrisp Popcorn (300).

Still, the angst is real: A source inside PepsiCo explained: “We thought we had done our part by helping reduce Americans’ calorie intake by 6.4 trillion calories as part of the 2010 Healthy Weight Commitment Foundation initiative – – we are now quite frustrated that the current Administration is piling on with these new requirements. So frankly, not much work has been done yet”.

Well, it’s time to stop whining and get to work.   ACA is not going away, and your country is depending on you.