For most people in Chicago, and many across the U.S., this year’s Little League World Series rivaled any other sport in excitement and inspiration. This was in no small measure due to a few unexpected subplots.

Yet Little League, with a chance to embrace a unique opportunity to broaden its appeal, missed a golden opportunity in its TV marketing effort.

For those who didn’t follow the LLWS (which ended yesterday), two story lines completely dominated the coverage, and for good reason: 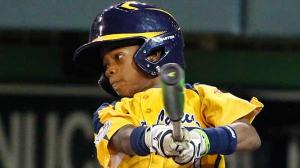 1) A team of kids from Chicago’s South Side, Jackie Robinson West, overcame significant odds to reach (and win!) the U.S. Little League Championship game (falling short in the World title game to a very strong South Korean team). These kids, all African-American, are generally from less privileged backgrounds, yet showed how far a person can go, through preparation, determination, poise and pluck. It was a joy to watch these kids play, and they truly united the city of Chicago across all socioeconomic and demographic strata, a particularly welcome shift from Chicago’s more typical tragic stories of violence.  They are true role models for everyone, not least those for whom organized sports may be less accessible.

2) Mo’ne Davis, from Philadelphia’s Taney Dragons team, became the first girl to pitch a complete game shut-out in the LLWS, with pitches over 70 mph. For opposing batters, that would equal a major league pitch of over 90 mph (due to the shorter distance to the plate). Mo’ne’s heroics helped her team to third place overall, and created significant publicity for her, including the cover of Sports Illustrated.  For girls everywhere, Mo’ne is a fantastic role model.

These two stories elevated Little League to a meaningful place in cultural significance, with stories about opportunity, teamwork, dedication and perhaps above all, inclusion.

Unfortunately, during the broadcast Little League, in a continuation of its ‘I am Little League’ campaign, showed a PSA that completely missed an opportunity.  The faces in the otherwise well-done spots were for the most part straight out of Norman Rockwell circa 1950: charming kids but not a person of color, and certainly not a girl, in sight.  (I saw this spot but was unable to locate it online.)

Here’s a fairly typical PSA from earlier in 2014; based on this past week, ‘I am Little League’ is now quite inaccurate:

In a world where organized sports for kids are increasingly specialized and expensive, there are too few examples of kids participating for the sheer love of the game (as opposed to a stepping stone to a pro career), or examples of girls competing effectively with boys on equal terms.

This year’s LLWS was a tremendous chance to say “We’re Little League – – we don’t care where you’re from – – if you want to play, we want you!”.

So perhaps this year’s LLWC was two big steps forward, and one back, but at least it’s headed in the right direction.  Now if you’ll excuse me, I need to make plans to attend Chicago’s parade Wednesday for the Jackie Robinson West team.