Judging a Book by Its Cover – A Tricky Business

I just had a bit of a branding epiphany.

Both are regarded as brilliant writers, with one key difference: Ms. Lee is still alive, and Mr. Clancy is not.

Apparently able to write from beyond the grave, Mr. Clancy’s name prominently adorns new books in the market, which at closer inspection are actually written by others (Grant Blackwood this time, Mark Greaney previously).

(in a bit of confusing overkill, a sub-brand third name is on the cover: “A Jack Ryan Jr. Novel”)

My initial gut response: Betrayal! They’re selling me Clancy and delivering Blackwood! Marketing malfeasance of the highest order! Isn’t Clancy’s writing the reason people bought the books? Isn’t he the brand? If not, what is the brand when it comes to books? 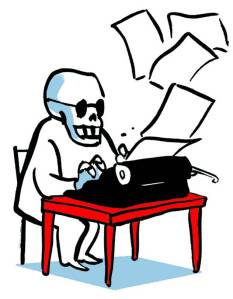 Joe Queenan takes a swing at this very topic in a recent Wall Street Journal piece (mentioning a few other dead-but-still-publishing authors), and this quote starts to get to it: “…it is the vision of Tom Clancy and V.C. Andrews and Robert Ludlum that makes their work so remarkable and unique, not the plots, characters, prose or leitmotifs. The actual writing is secondary.”

Apparently these posthumous publications still sell quite well. People have something in mind when they hear the names Clancy, Ludlum, and even Franklin W. Dixon (Hardy Boys) and Ian Fleming (James Bond).

In the same way a brand’s essence is the expectation it creates for what will be delivered, these authors set an expectation that is the core of these books’ attraction. And apparently the essence of these authors’ brands was their imaginations – the unique areas in which they chose to set their storytelling, and the imaginative approaches to the storyline – – and not necessarily the specific unique quality of their prose.

Indeed, Ludlum trademarked plot lines and partially wrote books before he died, which have been ghost-written as new material afterward, presumably with his blessing from beyond.

Forbes covered this topic a few years ago and has some additional interesting examples.

When you think about it, we readily accept the same phenomenon as it occurs for other brands in entertainment, where no one expects (or wants) to run into the name on the marquee:

So upon reflection, it seems OK in certain situations to evoke a person’s name that has over time consistently come to represent a type and quality of deliverable, and in effect has earned its right to be a brand.  That is what a brand is.  Even if it can leave you feeling a bit misled.

But this can only go so far.

Some things are not meant to be duplicated.