This is a story of abuse of a bully pulpit in the online survey arena – – by none other than the US Government.

First, some context:  Recently I opted to answer one of those familiar online surveys, because a) being involved in the survey business I was curious and b) they asked nicely.  I would have also opted for c) a reward, but no one was offering.

However, after about the tenth or eleventh screen of increasingly inane questions (“how many times, on average per month, did you take a left turn in your primary vehicle over the last 6 months?”), I punched out and the surveyer was left with bupkis – nothing.  If they’d kept it to about 5 minutes I would have been fine with it.

In surveying, as they say, just because you CAN doesn’t mean you SHOULD.  This applies equally to network TV, use of cellphones and enhancement surgery.  There is a diminishing marginal return at work.  But I digress.

The big kahuna of survey abuse came in the mail a few weeks ago – – the American Community Survey, cheerfully served up by your US Census Bureau.   This is a MANDATORY* survey that is constantly updated, and according to the website (accessible by clicking the graphic above), “generates data that help determine how more than $450 billion in federal and state funds are distributed each year.”  This includes typical data such as demographics, but then goes WAY beyond that. 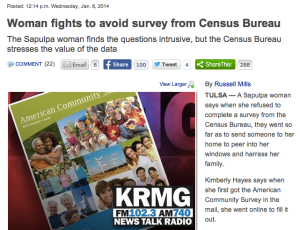 For the record, I have in the past been a big user of US Census data, and I’m a believer in its value for many purposes.

The reason this one is so objectionable is not only the intrusive information it asks, and not only the burden of time required to complete it, but also the $5000 hammer that awaits you if you refuse.  (There are apparently more extreme enforcement tactics, such as agents scoping out your house, but we shall stick to the meat of the matter).  It struck me as so out there that I actually considered contacting the ACLU to see if they can really do this.  The feeling subsided.

What The Survey Asks – –  check it out for yourself here.
– the survey starts out innocently enough – – ages, kids, ethnicity, etc
– then it dives into 2 sections that would make the NSA (or at least the IRS) blush:
1) HOUSING – – not just the expected house age, size, # of rooms – – this survey asks things like:
– exact types of computers, which of 6 types of internet service, monthly fuel expense, annual fuel expense, condo fees, monthly mortgage cost, real estate taxes, estimated resale value and other stuff including this gem:  “How much is the regular monthly payment on all second or junior mortgages and all home equity loans on THIS property?”
2) PERSONAL INFO – – commuting time, what time the person leaves home for work and how long they are gone (hmmm…)
– also questions about income that made me swear I was doing a second tax return:  ‘Wages, salary, commissions, bonuses, or tips from all jobs. Report amount before deductions for taxes, bonds, dues, or other items.”  “Interest, dividends, net rental income, royalty income, or income from estates and trusts. Report even small amounts credited to an account.”  Etc. [Editor’s note:  don’t forget the small amounts when dealing with the IRS.]

It goes on.  The point of this rant is that the good people at Census have the ability to use the power of the US Government to make sure we have usable planning data.  Fair enough.  But they didn’t know when to stop.  This is an imposition of hours, not minutes, and the absolute need for some of this data is questionable at best (suppose it is known what computers are at home and when you’re not…).  And we are being asked much of the same info from another government agency.

The ultimate irony is that the NSA has probably figured out how to get this info without us even knowing it anyway (only partially kidding).  So why impose this pain for arguably marginally useful information?  Because they can, I suppose.

Perhaps, like ACA, the designers of this survey would have been well advised to try it out themselves before subjecting all of us civilians to it.

Final thought:  Get off my lawn.  OK, rant over.