Trump Bolsters His Brand with MelaniaCare

The recent announcement on Donald Trump’s website about the development of MelaniaCare may end up being just more fodder for late night comics, but it actually is a smart move and entirely consistent with the Trump brand.

“MelaniaCare”, like ObamaCare, is a nickname – in this case for the Appearance Optimization Act (AOA), inspired by Mr. Trump’s wife.

In short, MelaniaCare proposes that all legal American residents be given access to affordable services that assist in optimizing physical appearance, including serious birth-related issues, but also a broad range of cosmetic deficiencies.   Treatments would be funded by a mandatory allocation of 10% of services of relevant professionals (such as plastic surgeons) to citizens with insufficient means to afford treatment. Mr. Trump has promised to personally fund procedures that he deems high priority.

In Mr. Trump’s words, “As much as we glorify education in this country, what is never talked about is the enormous, huge impact that appearance has on one’s ability to be hired and advance in a career. Appearance enhancement has until now been available only to the most privileged. MelaniaCare would assure that these procedures are available to all, so everyone would have an advantage. And believe me, in my campaign travels I’ve discovered that there is a huge need for these services, often for some very nice people.”

Under a Trump Presidency, if MelaniaCare is signed into law, here is what it would mean:

MelaniaCare coverage would include these treatments (among selected others):

Acceptable conditions for treatment include:

To keep costs under control, there would be no refunds, do-overs or appeal process in the event of unintended treatment-related effects such as:

Men’s appearance will be addressed after all women have been assessed, treated and relocated as appropriate.

MelaniaCare was tested for 15 months in Scottsdale AZ and Palm Beach FL, and while the level of untreated citizenry was extremely low, the mechanics of the program worked well. Per Mr. Trump: “Scottsdale and Palm Beach were enormously successful tests of the system, which gives us really unbelievable confidence when we extend it to areas of extreme need like the Midwest and Appalachia”.

Attractiveness as a determinant of success is a taboo topic, but undeniably is a real factor that is perpetuated by popular media. Mr. Trump, true to form, is unapologetically addressing this issue head-on, and claims that ultimately it will help the American people “in a really big way”.

“Pardon the expression, but a hot woman gets more attention and preferential treatment than an ordinary-looking woman. Think of the advantages the US will have if we export those who have been given a fair chance but just aren’t making it, and we improve the appearance of everyone who remains. We will tilt the playing field in our favor and will be able to negotiate some unbelievably awesome deals”. 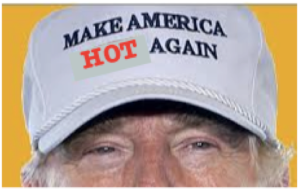 Wags are predictably calling this the Affordable Hotness Act (AHA), and using it as further proof that Mr. Trump represents a new low in American political life and culture.

On the other hand, Mr. Trump has done nothing but flaunt convention in this election cycle by appealing to a core base and making it work for him. An unscientific poll of Trump supporters showed strong support of MelaniaCare should it be signed into law.

MelaniaCare would certainly face challenges in the House and Senate, but regardless of the outcome, consider it another example of how to aggressively extend one’s brand.